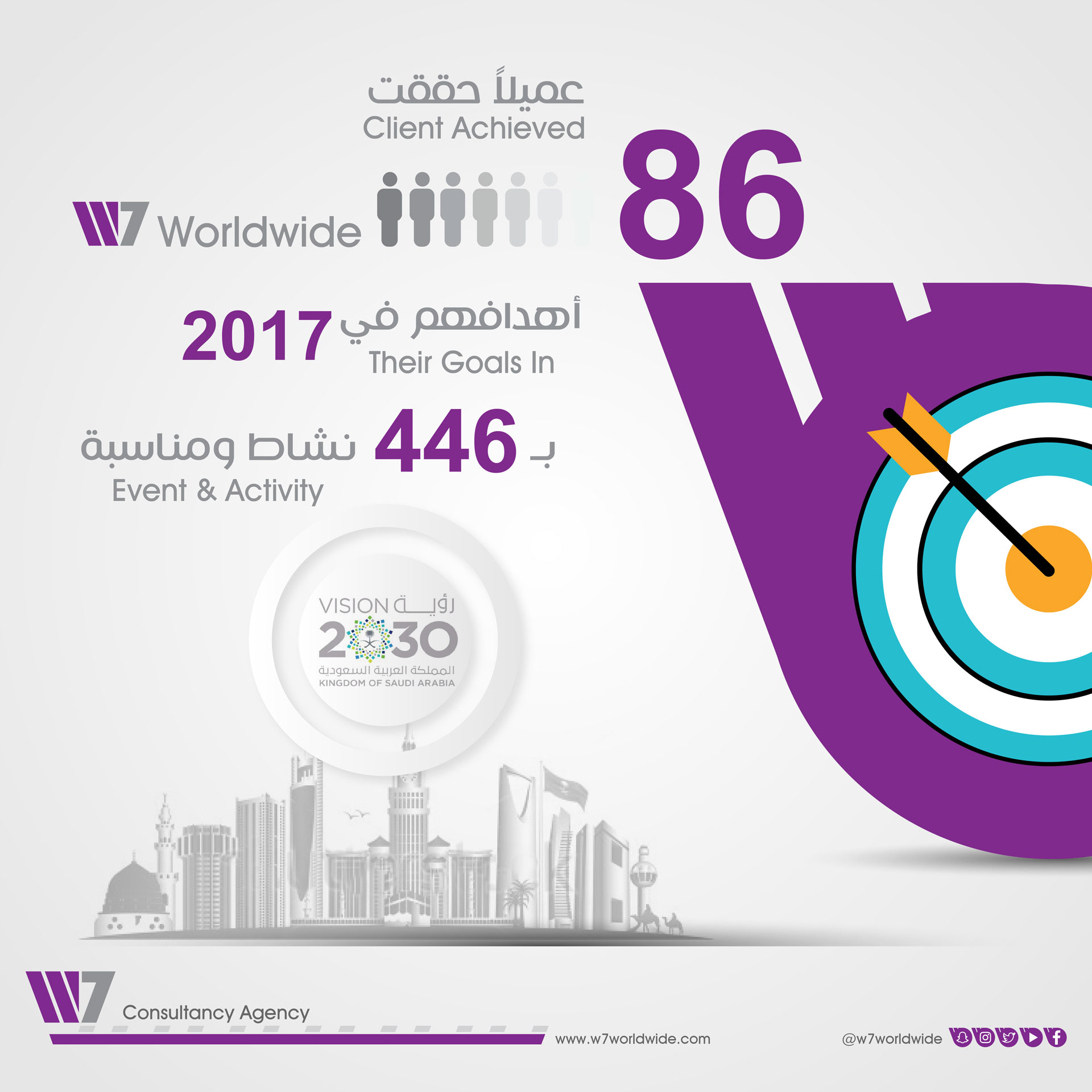 86 Brands Accomplished Their Goals in 2017 Through W7Worldwide

Jeddah, Saudi Arabia, 09th January 2018: The annual report of W7Worldwide, an Independent marketing communication consultancy agency, revealed a record surge in the number of clients it served in the past year (2017).

The W7Worldwide annual report, which was released in January, confirmed that it was successfully able to accomplish the goals for 86 clients, by bridging the right message to the right target audiences, over 16 different sectors ranging from Technology, Banking, Healthcare, Real Estate, Oil and Gas, Sports, Entertainment and Investment to Automotive, Insurance, Finance, Travel and Tourism, Education, and Retail.

Established in January of 2017, the Analytical Research division at W7Worldwide has generated a series of strategic studies, researches, and advisory reports.

This included an incredible joint advisory report with Altitude the US Defense and Aviation Consultancy titled “The slow pace of aviation liberalization and development in Saudi Arabia,” issued last march. In addition, the division presented in June an advisory report entitled” 99% of Islamic sites are not attractive enough for the new generation “accompanied by a solution that will help the sector mature in the future to come.

Among many others, the research and analytical study division also submitted an analytical report last September entitled “Sales of the Saudi and Gulf Automotive Sector – Details of the First Half of 2017.” In December, the Division ended the year with an extensive study titled “Vision of Gulf strategies for the system of the economy of exhibitions and conferences…Bahrain – A case study.”

W7Worldwide is betting on its Research and Analytical Study Division to provide new research work that will continue to have an impact on various vital sectors in the Kingdom of Saudi Arabia and the GCC region whilst enriching the Communication industry’s fast-paced growth. Previous studies and reports have heavily contributed to improving the future decisions of its clients in the short and long terms.

W7Worldwide appraised a series of achievements in 2017, managing 446 splendid events and activities for its clients across the Kingdom of Saudi Arabia.

The technology sector ranked first among 16 sectors, representing the top local, regional and international companies, accounting for 52.10%, followed by the retail sector with 15.91%, and then the entertainment sector with 10.53%. The annual W7Worldwide report included the share of other sectors as follows:

W7Worldwide possesses professional experience of global and local knowledge for the Saudi Arabian market to serve its clients in the fields of specialized research and analytical studies, strategic planning, reputation and image management for individuals and companies, public relations, social media, creativity and design, website development and technology solutions.

The report cited many corporate leadership letters that W7Worldwide served the CEO of Virtuport, the #1 organization in the Middle East and North Africa (MENA) 2017 Information Technology Conference, which noted that W7Worldwide played a professional role in delivering the conference’s message and its vision to the Saudi public in a manner that engaged the audience and made them relate.