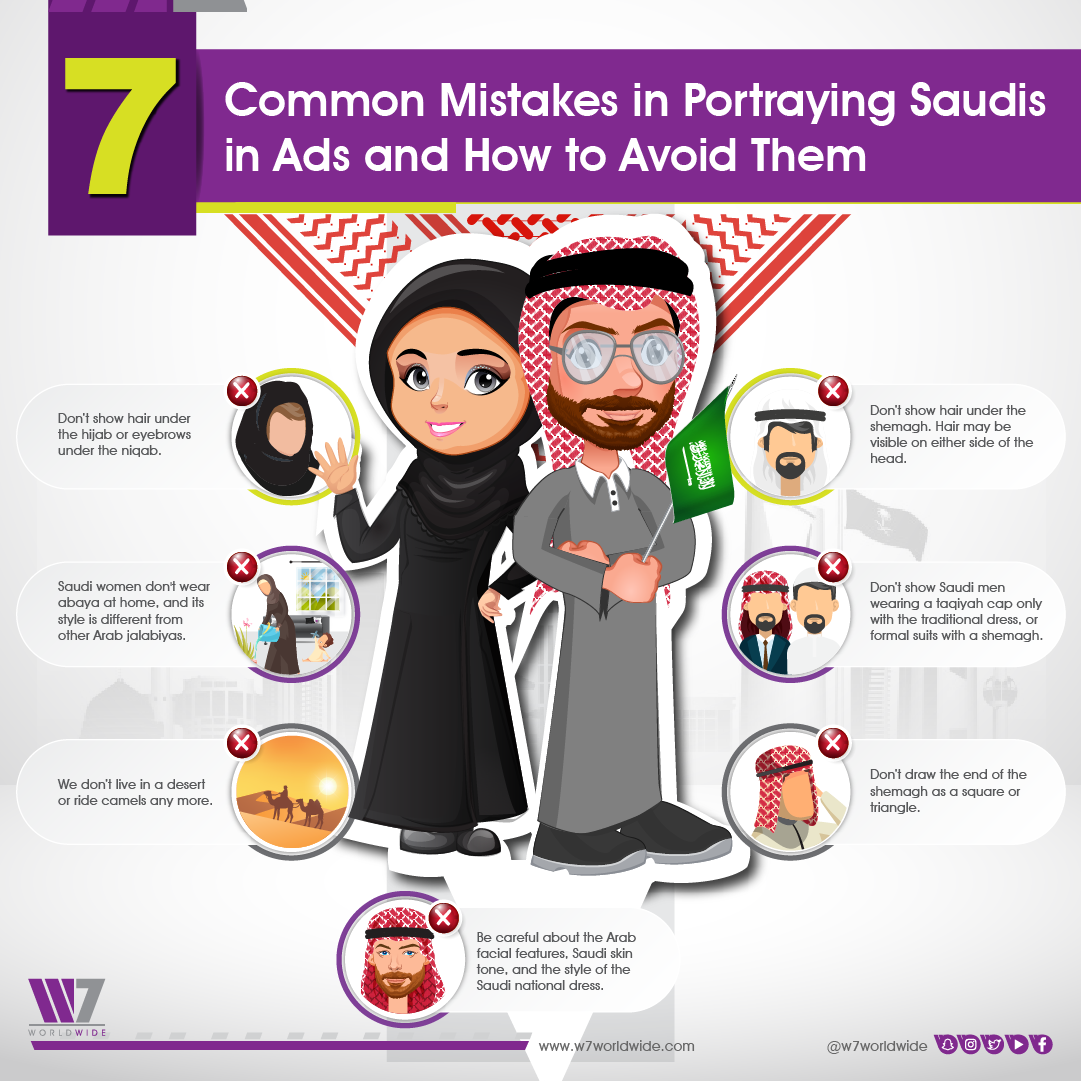 A quick online search for advertisements featuring Saudi or Arab men and women is sure to result in much disappointment as what is often portrayed in these ads is far from reality.

In this blog, we list the most common mistakes in the media portrayal of Saudis with tips on how to avoid them.

1. Pay attention to the shemagh and eyebrows

The Saudi shemagh is a traditional red and white scarf-like wrap. The shemagh is topped with the igal, a black rope-like cord, that holds it in place. Additionally, the niqab is the popular form of a veil worn by some Saudi women. However, designers and advertisers often seem to get it wrong. Here’s how:

– Drawing the end of the shemagh as a square or triangle: Doing so makes the shape of the Saudi shemagh unrealistic. To avoid this, search for and look carefully at different images of men wearing the Saudi shemagh before you get to work on it.
– Loose shemagh, wearing it as a turban or wrapped in the form of a veil: None of these practices are common in Saudi Arabia, although they may be more prevalent in other GCC countries. To correct this mistake, make sure the shemagh is tucked behind the man’s shoulders and folded on the sides.
– Wearing the taqiyah cap only without the shemagh: This is a major mistake, especially when portraying Saudis in formal or business wear. The taqiyah is worn without the shemagh only for informal gatherings or for prayer. Formal wear should always include the shemagh.

– Eyebrows under the niqab: The niqab covers the entire face except the eyes, where the eyebrows are also covered. However, not all Saudi women wear the niqab, and advertisers can feature women without the niqab.

2. Saudi men do not wear a formal suit with shemagh

Saudi men either wear the shemagh with the traditional Saudi dress – a thobe – or they wear formal western suits without a shemagh and taqiyah.

3. GCC countries do not have one common national attire

People of all GCC countries wear their national dress in a unique style that distinguishes them from their neighbors. For example, the UAE’s national dress has no collar and sports a long, braided tassel. This is an important detail to consider as some ads wrongly portray Saudi men wearing the summer dress (with short sleeves) with a shemagh as a formal business dress. Other ads show a Saudi man wearing the Indian or Pakistani traditional dress with a shemagh.

A European man wearing a Khaleeji traditional dress is not fooling anyone nor is an Indian family dressed like Arabs. These are easily recognizable mistakes. To avoid them, remember the following:

– Most Saudi youth tend to have a light stubble with trimmed sideburns.
– The eyes of Saudi men and women are predominantly black or brownish.
Saudi women do not wear the Indian saree under the hijab, nor do they wear a short skirt with a hijab. They wear abayas when outdoors. Additionally, women shaking hands with men in the workplace is not common.

5. Be careful with the skin color: Avoid making it too white or too dark

In general, Arabs can be of any skin color. From very light to very dark, Saudis have different complexions, with facial features ranging from Caucasian to African. However, the most common skin tone is light brown, accompanied with black hair.

A Saudi woman’s abaya is unique in style, compared to, for example, the Egyptian or Syrian jalabiyas. It consists of two pieces – a stole or tarha to cover the head and a long tunic-like abaya. While black is widely the color of choice for abayas, other colors such as white, beige, blue, green, pink, etc. are more popular nowadays. Moreover, Saudi women do not wear their abaya at home or during gatherings involving other women and family.

7. Saudis don’t live in a desert or ride camels

Often images showing prominent architectural landmarks in Arab countries include scenes of desert, tents or camels. However, Saudis live in modern cities like those found in the rest of the world and no longer use camels as the means of transport. Also, aloe vera is not found in abundance here. To avoid this stereotype, research as much as possible about the major Arab cities and how people live in them, with special focus on the cars and landmarks on the streets.

For visual support, we recommend the following twitter accounts:

Have newsletters lost their charm in today’s #PR world?

Check out our new blog about the 7 traditional yet effective PR activities you should use:
👇🏻👇🏻

Reply on TwitterRetweet on Twitter1Like on TwitterTwitter
Load More...