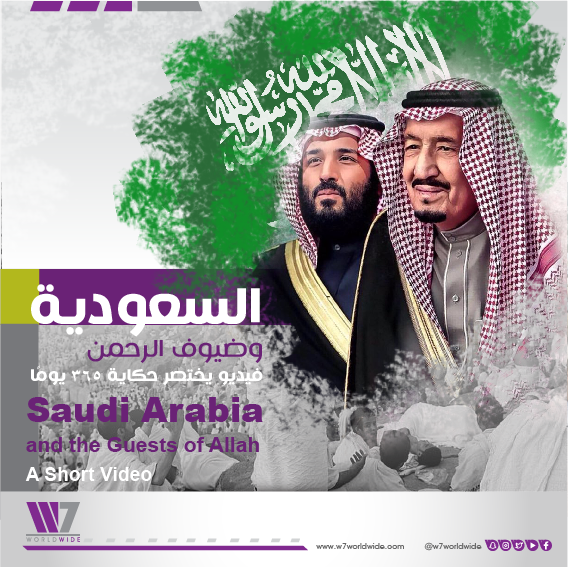 A Short Video Highlighting the Success of the 1440H Hajj

W7Worldwide, a Marketing Communications Consultancy Agency, produced a sequel, to its thought leading series titled “Pilgrims are in the Hearts of Our Kings”.  The 2 minute video focused on the Kingdom’s success during the1440H Hajj which hosted 2.5 million pilgrims from 164 countries around the world.

The sequel, titled “Pilgrims are in the Hearts of Our Kings” focused on the intricacies of the advanced systems and procedures that are design specifically to serve the guests of Allah, which are overseen by the Custodian of the Two Holy Mosques, King Salman bin Abdulaziz Al Saud and Crown Prince Mohammed – May God Bless Them-.

The short video highlighted the story of the 365 days of serving the guests of Allah through thousands of Hours of planning and strategizing, exercised by all government officials across several levels of government administration for the convenience of the those who seek the House of Allah.

One of the vital aspects that the video focused on, (https://bit.ly/2yOuI79), dates back to the end of last May when the King officially launched, the “Hajj and Omrah Program” part of Vision 2030 which has been developed with the support of 30 government officials. The program contains 130 initiatives developed as a result of survey of about 20,000 Muslims from 135 cities around the world.

The program aims to assist the pilgrims to perform their rituals with ease and comfortably by facilitating their journey and providing quality services to the pilgrims, and enriching their experience through revamping and development of more than 40 historical and archaeological sites, in addition to the establishment of museums and interactive exhibitions to emulate the most prominent Islamic historical events, such as the “Hijrah Road” initiative, which pilgrims can enjoy and visit. Furthermore, the program works to provide services to them before their arrival in the Kingdom by reducing the length of issuance of their visa by issuing it electronically through direct request.

Among the important initiatives that came within the context of the new video ” Pilgrims are in the Hearts of Our Kings”, the #Makkah_Road_initiative focuses on improving the services offered to the pilgrims, and facilitating their travel and pilgrimage, which was launched by the Ministry of Interior in cooperation with the ministries of “Foreign Affairs, Health, Hajj and Umrah”  the Saudi Customs Authority and Saudi Aviation Authority, and finally, National Information Center.

In the 1440H Hajj season, the initiative included five countries, namely Malaysia, Indonesia, Pakistan, Bangladesh, and Tunisia, to ease the movement of pilgrims during their arrival in the Kingdom, and to reduce their journey times from arrival to settling in their residence.

The Ministry of Hajj and Umrah is working to support digital transformation through an all rounded system known as “smart pilgrimage”. The video section cited the example of Manasikana, an interactive application in more than 8 languages ​​that helps the pilgrims during pilgrimage or Umrah, or while visiting Medina, to know the directions and destinations, and to serve what is beyond the limits of Al Masha’er Al Mqadasah “Muzdalifah, Arafat, Mena,” and Al Haram, to confirm their itinerary. The app contains offline maps, emergency services, A converter for coins, prayer schedule and direction of Ka’aba, weather in the areas of Hajj and Umrah, and news of special Hajj and Umrah, and Tweets for Hajj and Umrah issued by the ministry. ”

According to the team of “Pilgrims in the Hearts of the Kingdom’s Leaders”, the central idea of ​​the new video clip is to highlight the services provided to pilgrims during the reign of the Custodian of the Two Holy Mosques and his Crown Prince.

The video also points out a number of direct and indirect messages, the most prominent of which is the clear response to invalid claims to internationalize or politicize the pilgrimage, emphasizing the greatness of the holy places in the hearts of the leaders of Saudi Arabia, and their continued development of logistics, services, and procedural convenience for the guests of Allah. As a great responsibility and great duty to harness all the potentials and energies annually, which was confirmed by King Salman and his Crown Prince on more than one occasion.